Arsenal will face the current league leaders Manchester City in the EFL cup final that will be held at Wembley Stadium on Sunday 25th. The match is expected to be one of the most entertaining with the fact that the trophy remains on the domestic glory that the London-based arsenal is likely to bag away. However, the team will have a difficult time to prove they are mighty like the English premier league leaders, Manchester City, which is currently in good form.

Arsenal has won the EFL cup two times with their last win coming in 1993. They also emerged runners-up four times in the completion. Currently, the team sits in position six of the EPL. The team managed to win all its matches as it proceeded to the finals. They were held on a barren draw by Chelsea at Stamford Bridge. Fortunately, the team secured a spot in the final after recording a home win of 2-1 at Emirates stadium. Arsenal has recorded three wins and two losses in their last five matches.

The team attack and midfield are currently boosted with new entries, including former Manchester United midfielder H. Mkhitaryan, and Former Borrusia Dortmund talisman Aubameyang. David Ospina is likely to start as a goalkeeper in this match. Unfortunately, centre-forward Alexandre Lacazette is sidelined on injury terms while there are doubts on in-form midfielder Aaron Ramsey.

Manchester City has won the EFL cup a record of four times with their last win coming in 2016. The team has finished runners-up twice. They are currently the EPL league leaders. The team has recorded only one loss, one draw and four wins in the last six matches. The loss came in the FA Cup to Wigan Athletic on a 1-0 loss.

The team, under Pep Guardiola, has a potent forward line led by their leading scorer Sergio Aguero and likes of Sterling and in-form midfielder De Bruyne. The return of Gabriel Jesus will also boost the squad. Claudio Bravo is likely to start as the goalkeeper.

In the past six games, the team has managed an average of 2.2 goals and winning 50% of the matches on an over 2.5 goals win. The team is currently one of the best regarding midfield and attack fronts. It boasts an average of over 70% ball possession and six short on target. 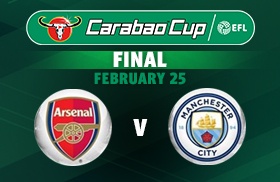 The two teams have encountered a total of 34 times in history: Arsenal has won 15 times, Manchester city has won eleven and eight matches recorded draws. In the last six encounters, the teams recorded two wins each and two draws. However, the previous game between the two sides ended in a 3-1 win in favour of Manchester City.

Take a look below at what some of the top online bookmakers have to offer you:

1xbet is one of the fastest growing bookmakers 1XBET are offering very early odds at competitive prices across a wide range of markets – bets on the outcome, correct score, HT-FT, total goals, the number of sendings-off, on goalscorers and many more.

Discover the superb sports betting platform that is 10bet and their 10bet bonus, with a huge selection of live betting markets. Extensive coverage of live betting odds on the Premier League including Asian Handicap and Over/-Under bets with Live Streaming also available for the Complete In-Play Experience